About Center on Assets, Education, and Inclusion

The mission of AEDI is to create and study innovations related to asset development, education, and financial inclusion that result in opportunities across the life course for low-income children and families, in the U.S. and around the globe, for the purposes of climbing out of poverty and up the economic ladder.

5/20/21 How California college savings accounts sow the seeds of higher learning at a young age
4/27/21 College Accounts at Birth: State Efforts Raise New Hopes
1/18/21 How Baby Bonds Could Help Close the Racial Wealth Gap
10/21/19 The Toll of Student Debt Goes Beyond Failing to Build Wealth
2/12/18 Imagining CSAs as a Tool for Combating Wealth Inequality
2/12/18 Why children’s savings accounts should be America’s next wealth transfer program
View all news

Poverty and performance on standardized tests in Rhode Island and Massachusetts: Implications for policy reform 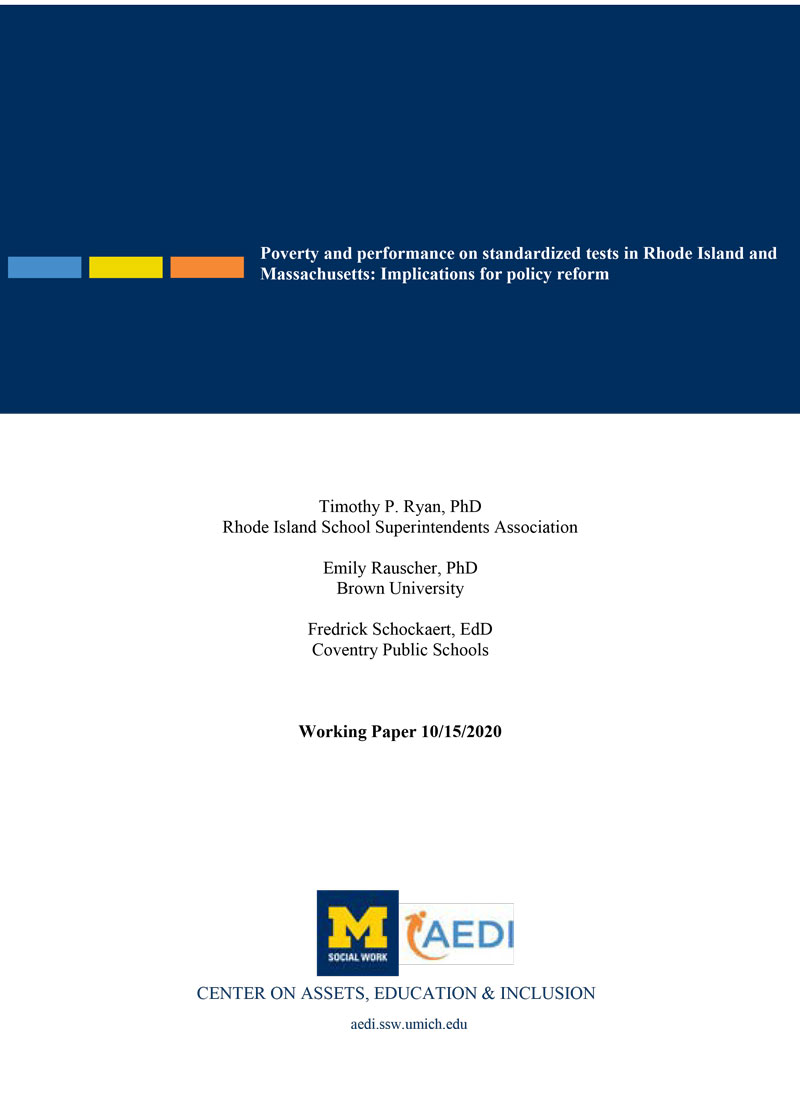 Improving educational outcomes for Rhode Island’s K-12 students is essential for the future of the state. While not an end in themselves, standardized tests can be used to measure school and statewide progress and guide accountability efforts. While extensive research has examined how student, family, school, and community factors influence test performance, one factor sticks out: student poverty (Reardon (2011;) (Carnoy & Garcia, 2017;) (Ford, 2011, (Kornrich & Furstenberg (2013;) (Duncan & Murnane, 2011). Because poverty is so closely related to performance, the failure to account for poverty can lead to misleading assessments of school performance, distorting policy efforts.

However, the relationship between poverty and school performance in Rhode Island, and how this should guide policy, is not well understood. Rhode Island currently uses standardized test data to comply with national reporting, benchmark performance, and identify opportunities for improvement. Expecting a fixed level of academic achievement for a certain amount of educational investment per student neglects the substantial variation in student experience and competency due to unequal family resources. A more nuanced understanding of the relationship between poverty and education would help to isolate schools that are performing well, and poorly, relative to their students’ poverty rate. Understanding the performance of Rhode Island relative to Massachusetts, a wealthy state and national leader in education reform, can help to elucidate the role of poverty in driving achievement gaps.

In this context, we used data on student poverty and 2018-2019 standardized test performance for elementary, middle, and high school students in Rhode Island and Massachusetts to examine the relationship between school district-level poverty and performance. 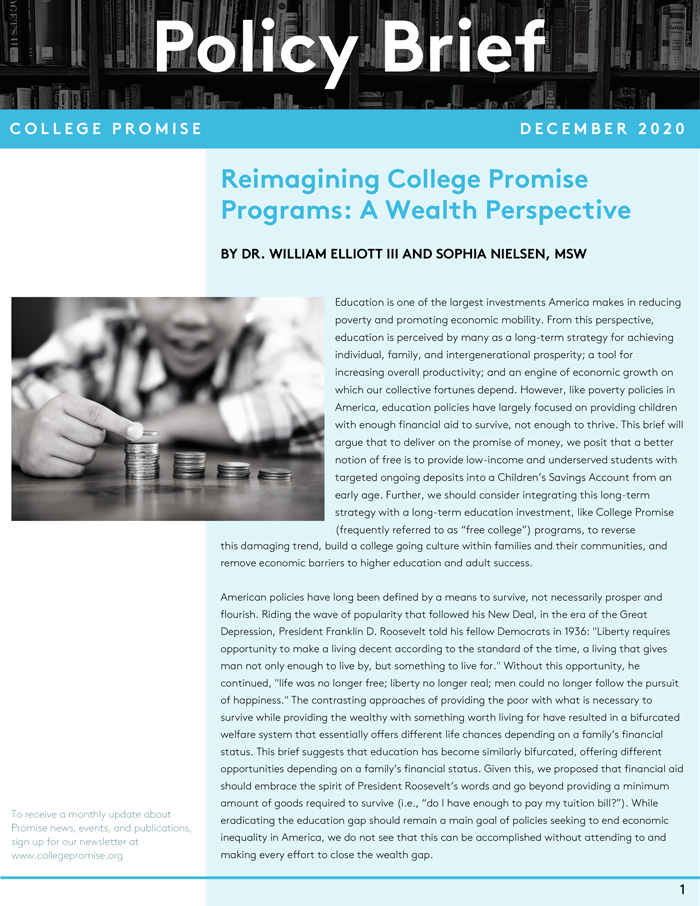 Education is one of the largest investments America makes in reducing poverty and promoting economic mobility. From this perspective, education is perceived by many as a long-term strategy for achieving individual, family, and intergenerational prosperity; a tool for increasing overall productivity; and an engine of economic growth on which our collective fortunes depend. However, like poverty policies in America, education policies have largely focused on providing children with enough financial aid to survive, not enough to thrive. This brief will argue that to deliver on the promise of money, we posit that a better notion of free is to provide low-income and underserved students with targeted ongoing deposits into a Children’s Savings Account from an early age. Further, we should consider integrating this long-term strategy with a long-term education investment, like College Promise (frequently referred to as “free college”) programs, to reverse this damaging trend, build a college going culture within families and their communities, and remove economic barriers to higher education and adult success. 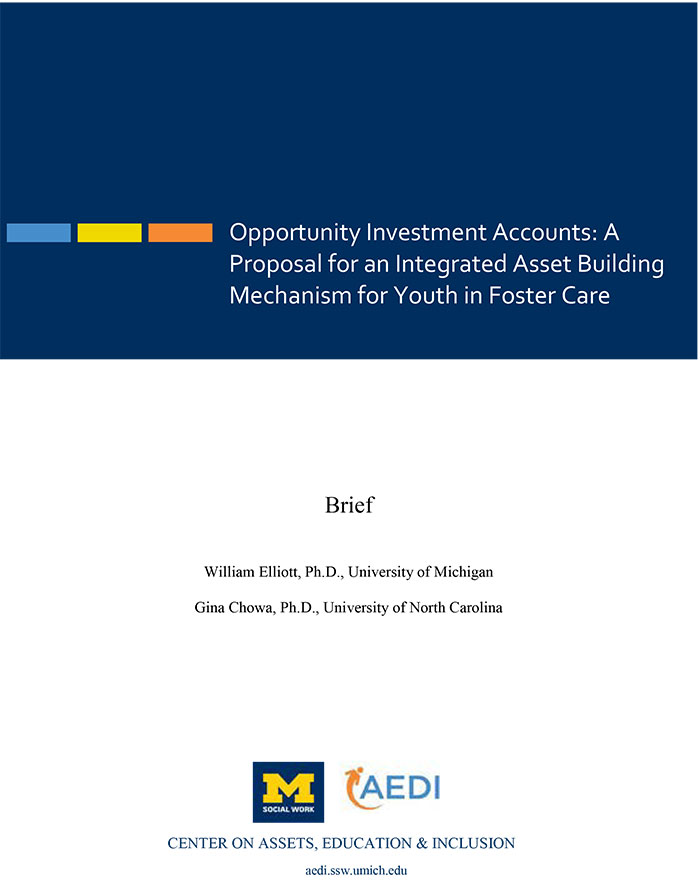 We should not lose sight of moments in our collective history when we, as a country, have dared to dream and, as a result, were able to leap forward. The race to the moon was just such a moment, when we were “pushed” by the Soviet Union’s early advantage in the “space race” to unshackle ourselves from our limited imagination and as a result developed new technology to explore space. The U.S. foster care system needs a similar push to move away from an exclusive focus on survival policies for foster care youth and move toward including an asset-empowered agenda that can provide youth in foster care with the opportunity to thrive. This report looks at adapting CSAs to work better for Foster Care Youth. 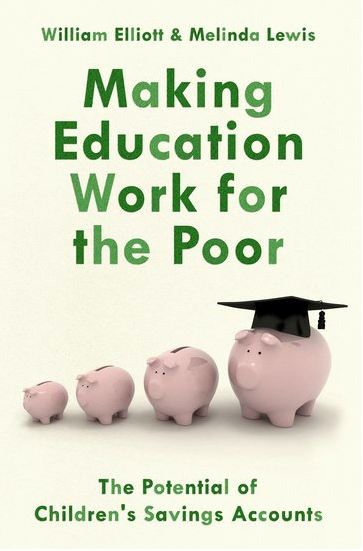 Making Education Work for the Poor, The Potential of Children's Savings Accounts